Excel MEDIAN Function is one of the central tendency functions, like AVERAGE and MODE. See how these functions compare. Examples show MEDIAN function in bonus calculations and Box Plot chart setup

The Microsoft Excel MEDIAN function is a measure of central tendency and it returns the number in the middle of a data set.

The MEDIAN result depends on the count of numbers in the data set:

The Excel MEDIAN function syntax has the following arguments:

You can type numbers into the formula, or use a cell reference, or refer to a large range of cells on the spreadsheet.

The three most commonly used measures of central tendency are Average (Mean), Median, and Mode. Here is a short comparison of the MEDIAN, AVERAGE and MODE functions in Excel.

Below, you can see two simple examples of measuring central tendency in a small set of numbers.

There are two small sets of numbers:

Worksheet formulas calculate the AVERAGE, MEDIAN and MODE for each set, and Excel column charts show a visual summary of the results.

In the first example, the numbers are symmetrically distributed 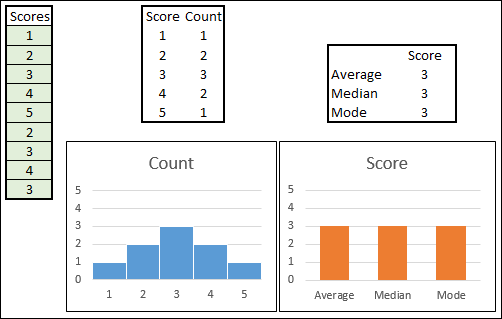 In the next example, the numbers are NOT symmetrically distributed, as you can see in the COUNT chart. 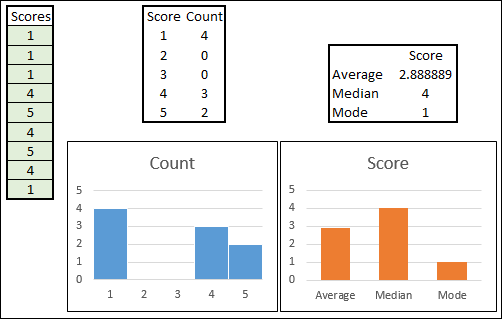 If you would like to test the data and formulas from the above examples, try this interactive Excel workbook, shown below.

There are two worksheets with number sets – one is symmetrically distributed, and the other is not.

To get the score counts, I used the FREQUENCY function.

Here is an example of using the MEDIAN function with a list of employee bonus payment amounts.

Thank you to Jonathan Cooper, who sent this example, with an unusual way to use the MEDIAN function

Jonathan had to calculate final bonus payments, based on earlier calculations (AmtA). There are 2 rules: 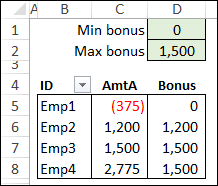 For each employee, there are 3 possible results, 0, 1500, or AmtA. I've sorted each set of numbers, from small to large:

In each case, the middle number is the amount that should be used as the final bonus calculation.

And to find the middle number in a set of numbers, you can use the MEDIAN Function.

So that's the function Jonathan used. Here's the formula in cell D8: 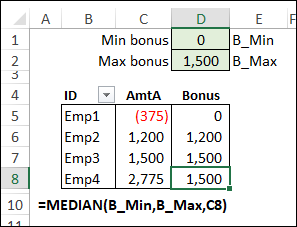 To see the steps for creating a simple box plot chart, using MEDIAN and other functions, watch this short video. The written instructions are on the Excel Box Plot Chart page.

You can read more about MEDIAN on the Microsoft site.

For more information on the differences between the AVERAGE and MEDIAN functions, take a look at this article that compares the median and mean (average) functions.

Bonus Payment: Download the Excel workbook that shows the bonus payment calculation. The zipped file is in xlsx format, and does not contain macros.

Box Plot Chart: Download the completed Excel workbook that was used in this video -- Simple Box Plot Chart. The zipped file is in xlsx format, and does not contain macros.